Thursday, August 11
You are now visiting:Home»Uncategorized»JAZZ VOCALIST ROB KEITER OFFERS HOPE AND HEALING IN "THE GLORY OF LOVE"

Oklahoma City, OK: As Rob Keiter stood at the microphone to record his vocals for “This Nearly Was Mine,” the opening track of his The Glory of Love album, a torrential flood of tears burst forth unexpectedly.  Although he could not contain his raw emotions while singing the heartfelt words about love lost, he sang anyway.  What was captured on the recording was something special and it established the tone for the entire collection of classic love songs in jazz settings, which will be released by Sketchin Records on October 26th.

“When I finished singing, I went into the control room to try to explain what happened.  Everyone was silent.  They felt it.  The song (“This Nearly Was Mine”) was recorded in one take.  We agreed not to record it again, that what we got was genuine and could not be duplicated,” revealed Keiter.

When Keiter began the recording sessions with producers Amber and Rob Whitlock for The Glory of Love, he was in the midst of a dark period following the breakup of a twenty-three year marriage.  Singing the songs that comprise the collection enabled him to grieve as well as to find new hope.  “Even though I had lost love, I wanted to sing love songs because I still believe in love.  Having sung my entire life, I would say that I truly found my voice as a result of that experience (in the studio),” he explained. 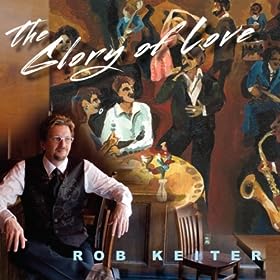 Keiter’s voice is suave, sophisticated, and silky smooth yet rich with feeling and warmth.  Although The Glory of Love is distinctly jazz – contemporary, swing and straight-ahead – Keiter and The Whitlock’s culled material with jazz, pop, R&B and even theatrical roots.  He recorded jazzy versions of eleven songs written by the likes of Rodgers & Hammerstein, Neil Sedaka, John Lennon & Paul McCartney, and a pair of songs each by Hal David & Burt Bacharach and Stevie Wonder.  The Whitlock’s penned an original song, “Grateful For A Pleasant Trip,” specifically for Keiter.  Backing the crooner in the studio was a fine cast of musicians including Grammy winner Randy Brecker (trumpet), Rob Whitlock (piano), Pat Kelley (guitar), Trey Henry (bass), Cliff Almond (drums), Amber Whitlock (vocals) and a horn section consisting of Wayne Bergeron (trumpet and flugelhorn), Andy Martin (trombone) and John Rekevics (saxes and flutes).  Radio stations will have a difficult time choosing between a handful of emphasis tracks such as “Laughter in the Rain,” “What The World Needs Now,” “Looking For Another Pure Love,” “For No One” and “What Are You Doing The Rest Of Your Life.”

After he started singing at age six in the church choir, Keiter later picked up the trombone and keyboard.  He learned the art of improvisation while studying the trombone.  As a teenager in Fort Lauderdale, he played in a band with Rob Whitlock, for whose musical talents he had great admiration.  Keiter earned a degree in music performance at the University of Texas.  During this time, he developed his skills as a scat singer, which he incorporates into his recordings to this day.  The spiritually inspired man went on to get a master’s degree in theology and a doctorate in ministry.  He continued to explore his passion for music by serving as the music director of a large church in Charleston, South Carolina while teaching voice and music theory.  After twenty-five years, Keiter reconnected with Rob Whitlock at a funeral for one of the members of their teenage band.  The reunion of friends led to the creation of The Glory of Love, Keiter’s first serious jazz release, which appears on The Whitlock’s San Diego-based Sketchin Records label.  Keiter is proud that his daughter, Rachel, a student at Berklee College of Music, contributed background vocals to the project.  And yes, in the end, the guy gets the girl.  Keiter recently relocated to Oklahoma City to be with his new found love.

Keiter’s The Glory of Love contains the following songs: